A young Texas doctor who died from coronavirus in September caught the infection after wearing the same N95 masks for weeks and maybe even months, her family claims.

Adeline Fagan, a 28-year-old OB/GYN doctor originally from LaFayette, New York, died after a two-month battle with COVID-19 that resulted in her suffering a ‘massive brain bleed’.

Fagan had been treating positive patients in the emergency room at HCA Houston Healthcare West when she contracted the virus in July.

Her heartbroken family now say that the lack of PPE supplied played a role in her death. It is unclear how Fagan contracted coronavirus. 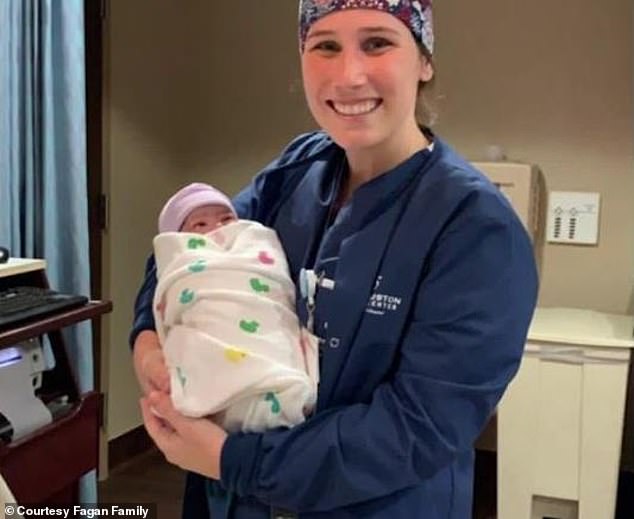 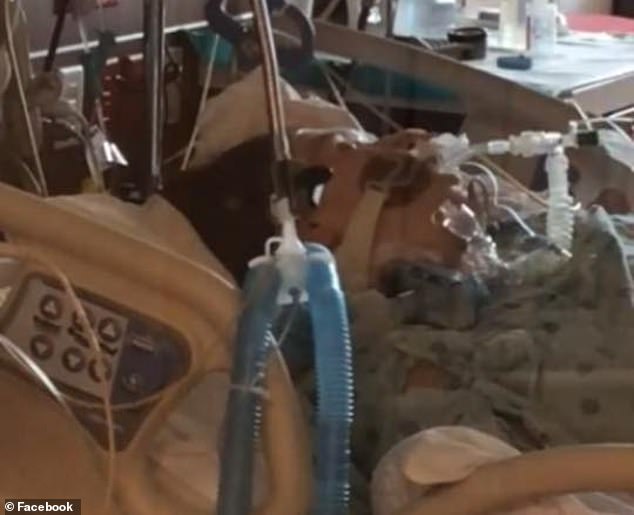 ‘Adeline had an N95 mask and had her name written on it,’ her 23-year-old sister Maureen told the Guardian. ‘Adeline wore the same N95 for weeks and weeks, if not months and months.’

According to CDC guidelines, a N95 mask should be reused at the most five times.

In recent months, a national nurses union has complained of the chain’s ‘willful violation’ of workplace safety protocols that included pushing for staff infected with coronavirus to continue coming to work.

The hospital told the Guardian that they did not have a policy on constantly reusing masks.

‘Our protocol, based on CDC guidance, includes colleagues turning in their N95 masks at the conclusion of each shift, and receiving another mask at the beginning of their next shift,’ said the facility’s chief medical officer, Dr Emily Sedgwick.

Fagan, the second of four sisters, was in her second year of residency at a hospital in Houston when she became sick.

The doctor, who had a history of asthma, worked in the OB/GYN unit delivering babies but was working shifts in the ER treating COVID-19 patients as the state’s hospitals buckled under the weight of soaring cases and deaths. 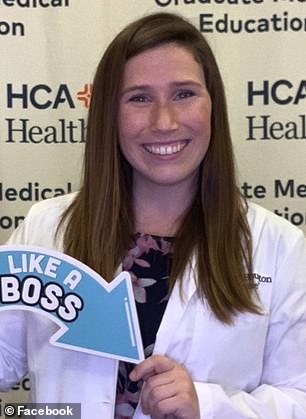 Fagan didn’t receive enough masks to protect her from the virus as she treated infected patients, her younger sister claims

During a 12-hour shift on July 8, Fagan began feeling ‘under the weather’ with flu-like symptoms, according to a GoFundMe page her family had established to help pay for her medical costs.

She tested positive for COVID-19 and her condition deteriorated, leading to her being hospitalized.

Fagan spent several weeks in hospital, with doctors giving her several drugs and respiratory therapies to help her overcome the virus.

She was intubated and placed on a ventilator on August 3 as her lungs could no longer support her, the GoFundMe post read.

The following day doctors ‘took the last remaining step available’ and placed Fagan on ECMO, extracorporeal membrane oxygenation, to oxygenate her blood because she was ‘not responding well to the ventilator’.

Her sister Maureen wrote on the GoFundMe that the family expected her to be on the ventilator and ECMO for at least six to eight weeks while her lungs healed from the virus.

Maureen described her sister as a ‘fighter’ who had ‘set her mind to surviving this virus’. 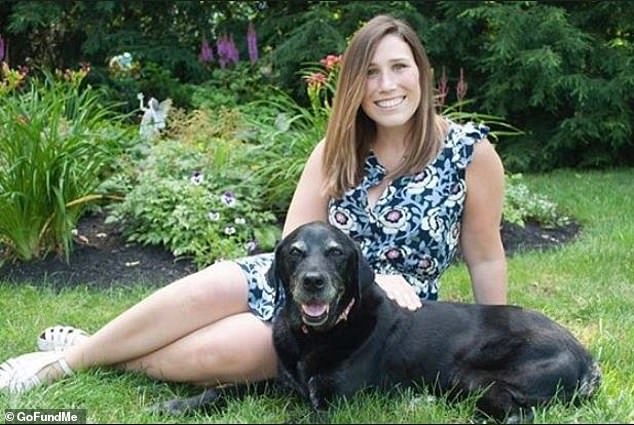 Fagan, an OB/GYN doctor originally from LaFayette, New York, died last month, hours after a nurse found her unresponsive and she was rushed for emergency surgery 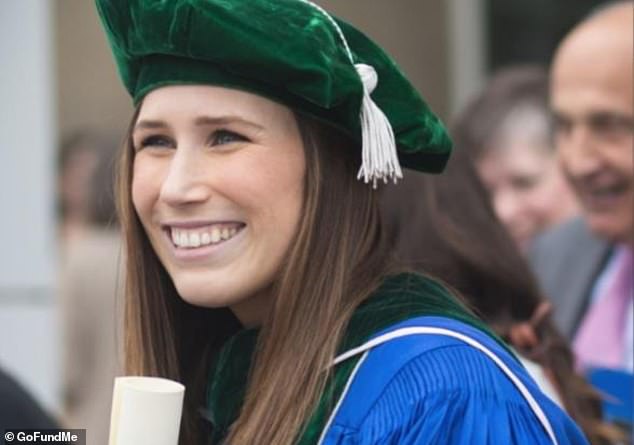 Brant, the doctor’s dad, posted an update on the GoFundMe page on September 19 announcing Fagan had died early that morning.

He said his daughter had been ‘doing wonderfully for the last few days’ and the family got a ‘good report’ on her condition just minutes before she suddenly worsened.

‘As we settled down for the night 30 minutes later, the phone rang – Houston, TX,’ he wrote.

A nurse had found Fagan ‘unresponsive’ and she was rushed for a CT scan that showed she had suffered a ‘massive brain bleed’.

She needed emergency surgery and doctors warned her chances of survival were limited.

‘The neurosurgeon said it was a ‘1 in a million’ chance she would even survive the procedure, but that Adeline would have several severe cognitive and sensory limitations if she did survive,’ he wrote.

A brain bleed can be a side effect of the ECMO, he explained.

‘Everyone was crushed by the events, the nurses, the doctors, and, of course, us. The doctor said they have seen this type of event in COVID patients that spend time on ECMO,’ Brant wrote.

‘The vascular system is also compromised by the virus, resulting in bleeds. We spent the remaining minutes hugging, comforting, and talking to Adeline. And then the world stopped.’

Brant wrote of the family’s heartache when their ‘world stopped’ and paid tribute to his daughter, urging others to ‘be an “Adeline” in the world’. 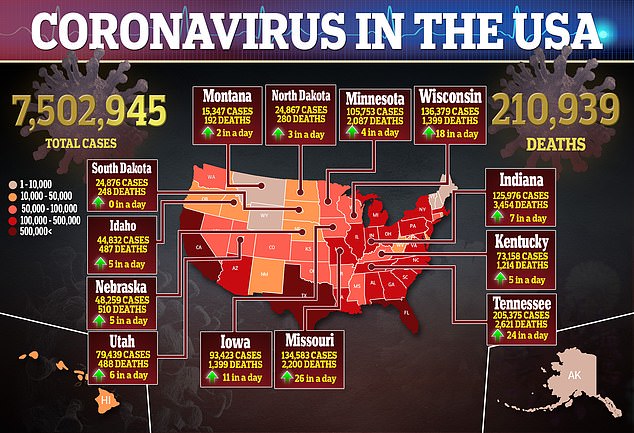 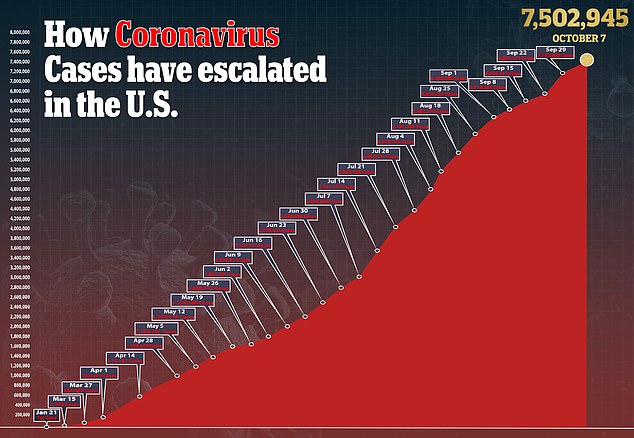 ‘The time the world stopped for a moment and will never be the same. Our beautiful daughter, sister, friend, physician, Adeline Marie Fagan, MD passed away,’ he wrote.

‘If you can do one thing, be an “Adeline” in the world. Be passionate about helping others less fortunate, have a smile on your face, a laugh in your heart, and a Disney tune on your lips,’ he wrote.

Dori Marshall, associate dean at the University at Buffalo medical school, added that Fagan ‘loved delivering babies, loved being part of the happy moment when a baby comes into the world, loved working with mothers’.

Fagan is one of 250 healthcare workers who has died of coronavirus in the US’s southern and western hotspot states, according the Kaiser Health News.

In Texas, there were nine medical deaths in April but this soared to 33 in July as the outbreak in the state worsened. 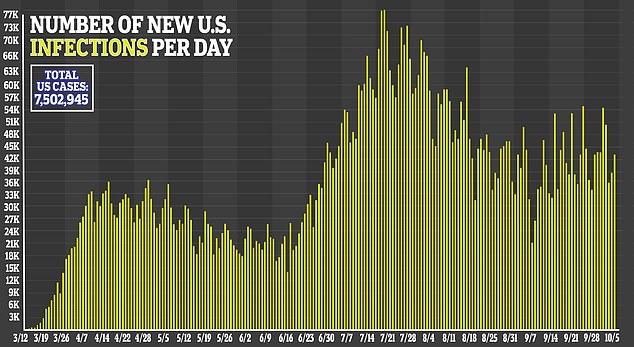 According to the project Lost on the Frontline, the average age of medical worker deaths from coronavirus is younger than that among the average population.

The median age of death from COVID-19 for medical staff is 57, compared to 78 in the general population, it reports.

The project adds that around one-third of deaths among medical workers involve concerns over adequate PPE and healthcare workers are three times more likely than the general population.

Across America, the death toll has now topped 210,000 and more than 7.5million people have been infected.