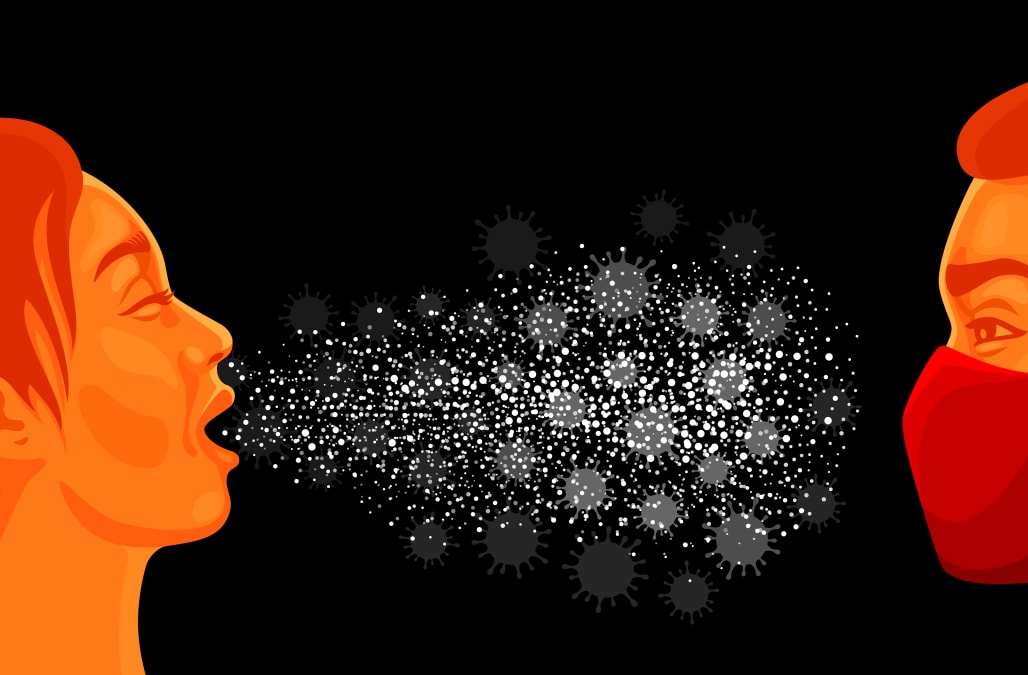 Experts first isolated SARS-CoV-2 in aerosols back in March, but the extent to which the virus spreads through the air is something that the scientific world is still evaluating. In the meantime, understanding some of the differences between respiratory droplets and aerosols is important.

The Centers for Disease Control and Prevention defines droplet transmission as occurring “when droplets containing infectious agents are propelled a short distance through the air (e.g., by coughing, sneezing, or talking) and deposited in the eyes, nose or mouth of a susceptible person.” Airborne transmission, meanwhile, is described as “dissemination of either airborne droplet nuclei (small-particle residue [5 micrometers or smaller] of evaporated droplets containing microorganisms that remain suspended in the air for long periods of time) or dust particles containing the infectious agent.”

These small particles, the CDC continues, “can be dispersed widely by air currents and may become inhaled by a susceptible host in the same room or over a longer distance from the source patient, depending on environmental factors.”

Dr. Donald K. Milton, an environmental health professor at the University of Maryland, elaborates further. “Aerosols are droplets that are suspended in air and float on air currents for many seconds to many minutes and more,” Milton tells Yahoo Life. “[Respiratory] drops land on you and have a small probability of hitting a vulnerable target such as your eye. Aerosols can be inhaled if they float into your breathing zone.”

While scientists agree that COVID-19 is airborne, groups like the CDC and World Health Organization have been slow to outline specific guidelines for mitigating risk. On Sept. 21, the CDC added an update to its COVID-19 page, noting that the virus can spread through aerosols, but removed it shortly after, writing that the organization is “updating its recommendations regarding airborne transmission.” The page notes that once the process is complete, the new language will be posted.

The WHO, which has also not posted specific guidance, detailed the differences between the two in a scientific brief dated March 29. In it, droplet transmission is described as occurring “when a person is in close contact (within 1 m/3 ft) with someone who has respiratory symptoms (e.g., coughing or sneezing) and is therefore at risk of having his/her mucosae (mouth and nose) or conjunctiva (eyes) exposed to potentially infective respiratory droplets.”

In contrast, it notes that airborne transmission “refers to the presence of microbes within droplet nuclei, which are generally considered to be particles [less than 5 micrometers] in diameter, can remain in the air for long periods of time and be transmitted to others over distances greater than 1 m.” In a July brief, the WHO noted that the organization, “together with the scientific community,” had been “actively discussing and evaluating whether SARS-CoV-2 may also spread through aerosols in the absence of aerosol-generating procedures, particularly in indoor settings with poor ventilation.” Aerosol-generating procedures are ones that generate more aerosols than are traditionally released through things like talking.

The difference in the way aerosols and respiratory droplets spread necessitates different prevention strategies. Shelly Miller, a professor of mechanical engineering at the University of Colorado Boulder, highlights the importance of airflow. “The main difference is that to reduce risk from aerosol inhalation you need to increase the outside air ventilation rate in addition to all other protocols (wearing a mask and social distancing and going outside and reducing time indoors),” Miller tells Yahoo Life.

She urges individuals to also be cognizant of other factors: “not spending too much time in a space where you share the air with many others that may be asymptomatic and infected, wearing a mask indoors, observing whether there are windows open or there seems to be enough ventilation (not hot or stuffy), ensuring occupancy is low and everyone is social distancing indoors.”

Milton agrees. “Masks and keeping physical distance are the first lines of defense,” he says. “The farther away someone is, the less likely that their exhaled breath will get into your breathing zone and be inhaled. For more protection against aerosols from people farther away, ventilation is important to remove infectious particles in the air. Ventilation prevents these particles/droplets from building up to dangerous levels indoors.”

My son nearly lost his vision after an eye infection. Here’s why you should be ‘aware of the hidden dangers’ lurking in bath toys

Women are having more angry, sad dreams during the COVID-19 pandemic compared with men, study finds

What is the Benadryl challenge? Why the FDA, TikTok users and toxicologists are warning against dangerous trend